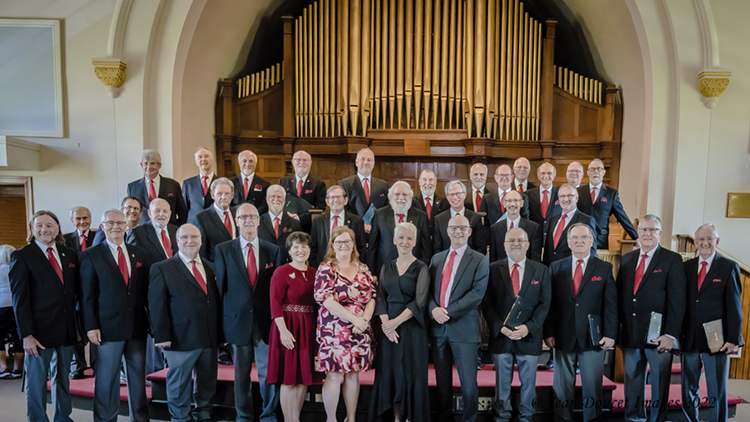 The Men of Note Male Voice Choir, based in Stouffville, Ontario, came together in 1999 with just 17 originals of which more than half are still singing in the choir. We now have over 30 members.

As we’ve grown in size so has our Men of Note family. Most members’ partners actively support the Choir, attending all our concerts and also traveling overseas with us. We’re a closely-knit group, one of which its fun to be part.

We hope to continue growing so we invite men who love the joy of singing to raise their voice in song with us. We meet every Monday night in Stouffville,  at the Stouffville United Church, 34 Church Street, Stouffville. Choir members travel each week from many points in the GTA including Newmarket, Toronto, Uxbridge, Aurora, Richmond Hill and Markham. So come along and join the song.

Men of Note is a Male Voice Choir built on a foundation of Fellowship, Community Service and a mutual quest for Musical Excellence. We strive to provide entertainment, in the form of a wide variety of music, to enrich our community and to reach out to develop musical connections with other choirs, both across Canada and abroad.

As such the group has assembled a pleasing balance of tenor, baritone and rich, resonant bass voices that together create an almost perfect blend of sweet harmonious sound. The group believes that our selections of music appeals to most everyone; a mix of favourite and familiar melodies for spirituals, sacred anthems, folk and traditional songs, tunes from the musical stage and sometimes, a love ballad from the hit parade.

Heather Williams completed her Bachelor of Music and Master of Music degrees in Canada and the USA before moving to London, England. During her 23 years in the UK, Heather worked as a collaborative pianist, choir accompanist, church organist, and Music Director for various theatre and opera companies. For nearly twenty years Heather also taught classroom music in London and the southeast, including six years as Director of Music at the renowned Harrodian School. Her school choirs have performed at the International Eisteddfod in Wales, the Czech Republic, and France.

Heather has had the privilege of performing and conducting at venues including Westminster Abbey, St Paul’s Cathedral, and the Royal Albert Hall.

Since returning to Canada, Heather has worked in Toronto as a collaborative pianist and vocal coach at the University of Toronto and as accompanist for the Toronto Children’s Chorus. She and her family are now settled in Port Perry.

Courtney Britton obtained her Honours Bachelor of Music Education from the University of Windsor in 2005 and her Bachelor of Education from OISE/UT in 2006. She currently holds an Honour Specialist in Music and is an Ontario Certified Teacher.

Upon moving to Stouffville in August 2009, Courtney quickly became involved in the music scene around town. She is the current music director at Stouffville United Church, past music director of Music Mania, and maintains a small private studio of voice and piano students.

Courtney teaches the primary and junior music programs at Joseph Gould PS in Uxbridge and lives in Stouffville with her husband Jason, daughters Daphne and Lucy, and their beautiful black lab Roxanne. 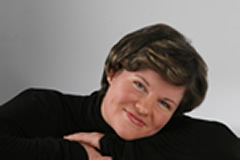 Susan Ryman was born and raised in the small community of Riverview, just outside of Moncton, New Brunswick. She learned at an early age that she loved to sing and to entertain.

Susan loves every opportunity to sing and enjoys sharing music with local artists.

Susan lives in Aurora with her husband Rick and their daughter Holly. She has recorded several CDs and is often a guest soloist with a number of choirs in the Greater Toronto Area. She can be contacted via her website www.2sendasong.ca.